Indulge in your soccer fantasy via the most realistic soccer gaming app for Android that lets you build, manage and coach your very own soccer team.

Soccer is without a doubt one of the most popular sports in the world and its biggest sporting event, 2014 FIFA World Cup, is highly anticipated worldwide as seen from the number of enthusiasts who flew and gathered in Brazil to personally watch and cheer for their respective national team and favorite players like Lionel Messi and Cristiano Ronaldo who are participating on the 2014 FIFA World Cup. However, watching the actual game can sometimes be frustrating and there are moments when you feel like the match could have gotten a better outcome if only a different move, kick or play was implemented.

Now, here is your chance to control the best players of the league and achieve the outcome you aim for as well as designing your own soccer jerseys and shorts by playing the best soccer gaming app on your Android device.

A prevalent soccer game among console gamers, FIFA 14 by EA Sports™ , can now be enjoyed on your Android device. This soccer gaming app has superior graphics and features over 600 licensed teams, 33 leagues such as English Premier League, La Liga, etc., 34 authentic stadiums and more than 16,000 players. It allows you to either earn and trade or buy and sell FIFA players so you can create your own dream team. You can also select your play style, formation, kits and more for that ultimate soccer gaming experience.

Score! World Goals is dubbed as the leading soccer gaming app in Italy and top 10 in over 50 countries including UK, Japan, Netherlands, Spain, Turkey, France and Germany. It is packed with exciting gameplays where you can recreate more than 900 goals from different leagues from all over the globe. In addition to that, it is designed with ultra-realistic graphics to give that console like feel and comes with more than 500 motion captured animation and entrancing audio.

Another popular soccer gaming app in Italy, Singapore, Belgium and Turkey is Dream League Soccer . This sports gaming app grants you the opportunity to build your fantasy soccer lineup via recruiting your own players (maximum of 32) which you can train using the featured unique player development program to enhance ball skills, fitness, distribution and a lot more. 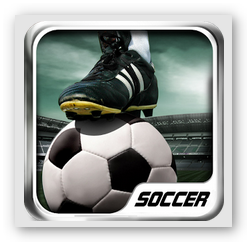 Do you prefer doing free kicks rather than the whole nine yards? Then you will definitely have a blast playing the soccer gaming app Soccer Kicks (Football) . It supports 2 Player Mode and features three gaming methods which includes “Target”, “Tournament” and “Timed and Practice”. It is also easy to navigate, all you have to do is flick the ball to kick it out then to control the direction of the ball, you may either swipe to adjust the location or gesture curve (on the screen) to arc the flow of the ball.