Just turned 10 and still counting, join us as we take a journey down the memory lane to commemorate Facebook Anniversary and how it changed our way of life.

What started as a social networking service exclusive for Harvard students, Facebook is now the largest and most popular website with over 1.25 billion users all over the world. As it celebrates its 10th anniversary, we can’t help but marvel on how Facebook kept users interested and loyal that it managed to grab and hold on to the top spot even to this point when social networking websites are sprouting like mushrooms.

Rewinding to more than a decade back when Facebook is still perhaps on the drawing board of Mark Zuckerberg (and his college roommates), Friendster and MySpace dominated the online social networking service. These two rival websites were quite the “it” thing back then, but somehow they failed to uphold their users’ enthusiasm, eventually causing the steady decline of members. Then in 2004, Facebook came to life and the rest, as you may know, was history.

Never Too Far Away…

Facebook’s vision of connecting the world has such a tremendous positive effect especially to families and relatives who lived across the world. It bridged the gap that snail mails, emails, phone and video calls was not able to suffice. It made families who are miles apart felt like next door neighbors. Through photo and video sharing on Facebook, they get timely updates about their loved milestones.

Good To Know: You may use Free Facebook Video Downloader to grab videos that your family or friends uploaded and shared on Facebook.

Blast From The Past…

Dwelling in the past is not healthy at all, but it definitely made a lot of  Facebook fanatics smile from ear to ear. Throwback Thursday and Flashback Friday are just some of trends that took Facebook and other online social networking users by storm. This awesome theme, scheme is more like it though, made Facebook followers rummaging through their old photo albums in search of their childhood snapshots (the older the better) on a weekly basis just so they can upload and post this piece of funny, cute and sometimes awkward yet heartwarming memento of themselves or with friends and family every Thursday for “Throwback Thursday” or Friday for “Flashback Friday”. Recently, the stuff shared on these two most celebrated days on Facebook is no longer limited to personal photos. You may also share videos, movies, music or just about anything that made your past worth looking back at.

While MySpace spearheaded the trend of creating unique URLs for Artists (and companies) where they get to interact with their fans and supporters, advertise their movies, albums or any project that they are currently working on, as soon as Facebook undertook the latter in ratings, it is inevitable that most artists, including actors, models and the likes switched and migrated to the leading social networking site as means of reaching out to their fanbase.

As the number of Facebook users increased, entrepreneurs everywhere experienced the same “light bulb” moment. Almost all large and small businesses or companies have their own Facebook account where they get to freely showcase and advertise their current and upcoming products or services. It also provided a great avenue to establish and improve business relationship as they get a firsthand feedback from their clients and consumers. Furthermore, it has been noted that businesses or companies that have a Facebook account enjoyed a dramatic boost in terms of sales and popularity compared to those who are yet to create one.

Good To Know: Facebook started selling stock to the public and NASDAQ trading early 2012, a vivid indication that it is truly one of the most successful startup companies to date. 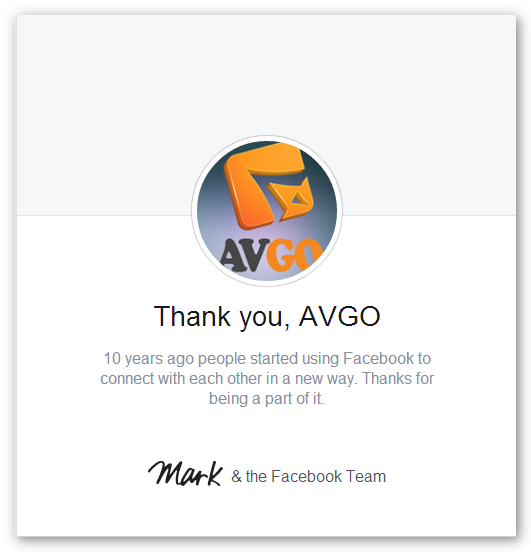 As a token of appreciation for their loyal users, the Facebook team has worked and launched another ambitious project, the “Look Back” video. This short video aims to narrate your Facebook life story, from the time you joined up to the present, through a compilation of some of your most liked pictures, shared posts, statuses, life events and more. Though it is just a quick one minute video, it is still a very sweet and thoughtful keepsake from the website that made us feel closer and connected to the world. Again, Happy 10th Birthday Facebook, all the best and more to you!