Boost the productivity of your tablet and be able to type faster and more fittingly by using any of the following recommended Bluetooth keyboard for Android tablet.

For the ultimate entertainment portable device, the Android tablet is absolutely the smarter choice over a laptop as far as flexibility and mobility is concerned.  It makes a great gizmo for viewing videos, playing games, surfing the internet and as well as when you need some official work done like documents, spreadsheet and more.  By downloading an office suite app suitable for Android, you will be able to create reports and the likes on your Android tablet whenever the need arises.  However, the touch keyboard could be a bit of a disadvantage when using a tablet to undertake such task, therefore, if you want to do things quicker and easier then it will be best to use a Bluetooth keyboard for Android tablet.

In connection with that, we have rounded up some of the finest Bluetooth keyboard for Android tablet that will enhance the inputting efficiency of your Android tablet. 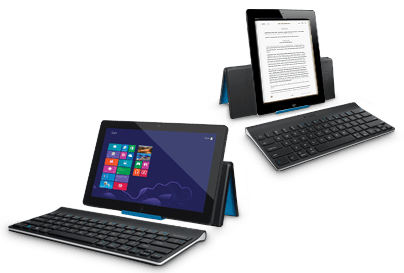 Logitech Tablet Keyboard For Android couples effortlessly with both Android and Windows tablet.  It operates on Bluetooth 3.0 technology with a width of 11.13 inches and length of 5.12 inches.  This Bluetooth keyboard for Android tablet has built-in media control functions that enables you to easily play, pause and control the volume of the video you are viewing or tune you are listening to.  On top of that, the complete package comes with a carrying case to protect your keyboard which also transforms into an angle adjustable and durable stand for added convenience.  Also included in the set is 4 AAA batteries.

iWalk Bluetooth Keyboard is justly dashing as it is flexible.  This keyboard for Android tablet is lightweight (1.4 lbs.), 0.5 inches thick and links to any smartphone, tablet (Blackberry, LG, Nokia, Samsung, other Android smartphones and iOS devices including iPhone, iPad and iPad Mini) and other Bluetooth enabled device through Bluetooth 3.0 technology.  Perhaps, the most notable feature of iWalk tablet keyboard is that it is armed with a long lasting (up to 300 hours), rechargeable (via USB), high performance Li-Polymer battery.

Another flexible for Android tablet is Logitech K810 Bluetooth Illuminated Keyboard .  It connects seamlessly to any PC, Android smartphone or tablet (3.0 or later) and Apple devices running iOS 4.0 or later.  Similar to iWalk, it is also a USB rechargeable keyboard.  What sets this tablet keyboard apart from its competition is the “hand proximity detection” feature.  It is equipped with a motion sensor that turns the keyboard illumination on when it detects your hands as it approaches the keyboard and off when not in use to save on power.